Initial structured is estimated about 7 century A.D. The Catholic was structured beteween 11 and 12 century A.D. Initially it was basilica with dome destroyed by Turks. The roof was renovated in 1600 A.D.as the initial plan while for walls stones from 5 century B.C. were used 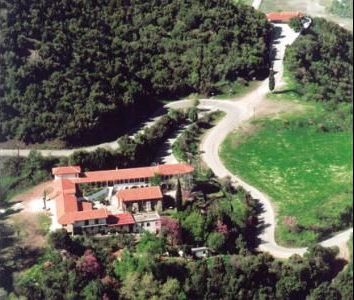 Between 1725 - 1757 was made the current painting of the monastery which has a lot of wear. The previous one was destroyed. Above the entrance is written:

During the 400 years of Turkish possesion the monastery served and helped the Cristians and the revels of the region. In 1833 was abandoned. During World War II was a shelter for the village people. It reopend in 1964 and renovated in 1975 to its present form with the help and funds from donations .